Last month I shared with you a special book – the 1986 Pripyat Photo Album. That unique publication was once widely available in shops and libraries of Pripyat, today it is a rare sight, often selling in a blink of an eye at insanely high prices. Many Pripyat residents and their children own it but understandably very few would give away this silent remainder of the night which forever changed their lives. 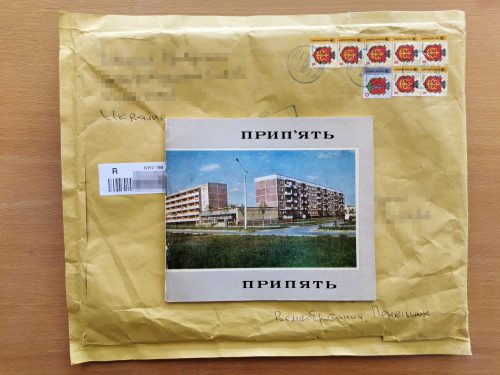 While physical copies of the 1986 photo album are quite hard to find, there is yet another, even more rare and little-known book in existence which in my opinion overshadows it. Titled simply “Pripyat” and released in 1976 in Kyiv, this photo album tells the story of a newly founded atomic city and a nearby power plant. Over the last few years I came across a copy of the 1976 Pripyat album only once and I have been looking for it ever since, so you can imagine my excitement when I saw a yellow padded envelope covered in Ukrainian stamps waiting in my letterbox

I carefully ripped the edge of the wrapping and there was in its full glory – a surprisingly small and inconspicuous booklet, poorly printed on low quality paper, with misaligned colours and photographs on more than one page. Exactly what you would expect from a 44 year old book produced in the Soviet Union.

It is an incredibly rare find, a period of Ukrainian history preserved forever. Here lays, frozen in time, the young city full of hope for the future of a proud nation. Photographs of wide, clean streets, modern restaurants, newly built schools, nurseries, and apartment blocks still smelling of snow-white paint. Among them children and adults working, studying, playing and relaxing – young residents of the model atomic city living the ultimate socialist dream.

This utopian vision is just a backdrop for the Chernobyl Nuclear Power Plant construction site full of Stakhanovites – model workers inspired by Alexey Stakhanov, the Soviet hero who aimed to work harder and more efficiently than his colleagues during the rapid industrialisation of the Soviet Union in the 1930s. Those men and women would be highly praised by their superiors and the society, with a little help from the omnipresent Soviet propaganda machine. The hardest working individuals could count on a bit more than shaking hands with local party officials for a press photo, with a shiny new Moskvich car or a roomy flat in an attractive location awaiting those who could beat previous production records. Perhaps years later some of them sat in their cosy apartments on Lenin Avenue, overlooking lanes of rustling trees and shops decorated in intricate mosaics with shelves bowing under the abundance of goods and the best treats Soviet Union had on offer.

I have carefully scanned the entire book and translated the introduction and all captions as well as I could. The text was printed in both Ukrainian and Russian. You can view the original 1976 Photo Album book by clicking on the thumbnail below, or scroll to the bottom of the page for the English translation.

English translation of the introduction:

The names of the towns are not accidental. Although it is virtually impossible to detect origins of the name of the older towns in the myriads of the ancient records. It is quite achievable when it comes to modern names. Moreover, it is usually quite obvious. In this case, however, the reason to give a self-sufficient town an ancient name of a river on which banks it was built, remains confusing. The internal human longing for a closer relationship with the beauty and purity of Nature may have been the initial intention of the name origin.

Pripyat is a quiet and affluent river with a whimsical pattern that flows among the banks Ukraine and Belorussia. A beautiful forest is surrounded by the plethora of crystal clear lakes that nourished its lavish neighboring woodland.

From the very start of the construction near this river, the main goal was to preserve each tree and every single bush of this land.

The town is still growing. Take a bus 18 km north from the quaint Chernobyl, drive pass the thick pine woods and turn right. Watch the scenery instantly change right in front of your eyes, with a sudden appearance of the broad alleys and cozy housing districts. The effect is quite breathtaking and as confirmed by the local architects was intentional.

If you chose to take a waterway by “Rocket” to get to the new town, it will be a different view and experience.

Regardless of the way you decide to reach Pripyat you are bound to love it. You may be impressed to know that the first residents inhibited the town quite recently, namely in September of 1971. Numerous of stunning architectural designs now occupy what previously was a sand land with some pine trees. It is a modern dynamic! What kind of force turned sand deserts into the neat town streets? The answer is the enormous construction of the first in Ukraine nuclear plant taking place next to the new town. The tremendous efficiency of the Chernobyl nuclear plant will significantly raise the power ratio of the national economy in the European part of the USSR.

The expansive construction is going non-stop. The frame is being erected, the atomic reactor is getting mounted putting the units together. The whole country is involved in building this plant. Turbines are sent form Kharkiv, generators are from Leningrad. Plants from all over the Russian Soviet Federative Socialist Republic are supplying the construction with a metal framework.

The workers of the Chernobyl plant are highly motivated by the competition with the construction team of the nuclear plant in Kursk, which are parts of the same project. Hence, these teams eagerly share their experience as well as specialists. For example, the first unit in Kursk was assembled by one of the best teams from Chernobyl managed by Ivan Umansky.

The team is successfully implementing this useful experience at their local plant construction which is soon to produce the first results. The workers of the Chernobyl nuclear power plant made a promise to complete two tremendous construction projects and fulfill the tenth five-year plan.

The town grows along with the construction. The people who work at the plant are building the town by applying equal efforts and care. Let’s take a walk in the streets of Pripyat. Here’s the main highway of Lenin Avenue. The new bright 5 story buildings complete the streets without making them look dull due to the picturesque designs and creative solutions. The close construction of the plant does not disturb the unbelievable freshness of the air in addition to the abundance of greenery and flowers. There are already seven streets like that in Pripyat.

Aside from previously built houses and stores, there are two schools, a technical college, Music Academy with a concert hall, a theater, and the plant for household services.

The kindergartens and day-care centers of Pripyat are cozy and adorable! The architects and artists put special efforts while creating these various children centers to make them unique.

A warm feeling of the commune and being a part of one mutual goal is prevailing in every project of this town. People here cannot imagine the work done another way. “We are building a kind of town and a plant-like has never been done before!” It is hard to argue with them as the town and the plant are being constructed according to the latest technologies and modern achievements.

It is not a surprise that the youth here is attracted to knowledge. A local technical college is simultaneously training 850 qualified specialists for the needs of construction. It also comes naturally, that upon graduating high school young people are dreaming of working at the functioning nuclear plant. Pripyat is full of different talents. The workers of the Chernobyl power plant, medical workers and teachers put together a choir.

Art shows are not a rarity here as well. Through their craft, local artists celebrate modern Pripyat as everything that surrounds them is inspiring. Many artwork pieces are dedicated to the heroic past of our Motherland as well as sacrifices of the Soviet soldiers during WWII. Among those are the heroes who died while protecting this very land that is now dedicated to the construction of the nuclear power plant. In commemoration of his bravery in the deadly battle, one bright and beautiful street is named after the Soviet Union hero – Igor Ivanovich Lazarev.

There are many poets in this young town. They write about youth, love, and true friendship at the construction that brought together people of our country from over 20 nations.

Their life is thriving with various performances often offered in the Concert hall of the Music Academy. Local amateur artists, and friends, the entertainers from Kyiv organizations, come to show off their talents. Sometimes the town is visited by the artists from professional theaters. This is an ordinary day of modern Pripyat. No one knows what the next day will bring, as the town is new and still growing. The architects are working on new ideas, some of them are being commenced right in the middle of the town. The central square is being prepared for a new big project. There will be a recreation center with a capacity of 800 seats, a large hotel, and a shopping mall. The area designated for this public center is planned to gradually link with a park and a sports club. Previously finished projects, Music Academy and a theater will become the part of this main public space. The two newly completed 9-story buildings add a touch of architectural diversity to Pripyat’s design.

This main public space is surrounded by the housing districts, where two are already complete, and the third is being designed. It is planned to become a quiet fascinating part of the town. An incredible pine park will surround the various children’s centers and institutions.

These are just the plans for the near future. The architects have already worked out a development plan taking into account 65 thousand people.

Naturally, it is closely connected to the industrialization of the given area. Aside from the previously completed nuclear plant, a development project includes building many other industrial enterprises. All the operations combined will create a vital industrial core that is very essential for the functioning of the town of this size. All the industrial operations are being designed to maintain the breath-taking nature of this land. In fact, nuclear power manufacturing was rated the cleanest and most safe among all other industries, according to the IV Geneva Convention covering the aspects of the peaceful use of nuclear energy in the world.

The main goal is to conserve the richness of the Pripyat river with its various types of fish. As well as to preserve a comfortable coexistence of all the flora and fauna with the residents of the new town.

The town will grow and flourish with marvelous architectural projects. The river, that marked the origin of the town’s name, will be crowned the bridges. It will become a vital and organic part of the town and serve its people who in return, will forever safeguard its beauty and purity.